FORT WORTH, TX – Get out your calendar and make sure Panther Island Pavilion is all over it! An eclectic bunch of events are coming to Fort Worth’s favorite outdoor event venue. The schedule is packed with old favorites and some exciting new events that will keep you coming back all year long.

Syndicate Smokedown (April 25) – Cowtown’s premier BBQ competition hosted by the Fort Worth Stock Show Syndicate. Featuring cold beer, live music and of course, BBQ! You will not want to miss this showdown.

Go Texan Food, Wine & Art Festival (May 8 & 9) – Spend your weekend keeping it local. This event is bringing over 30 local wineries with a selection of over 250 different wines, over 50 local artists and vendors, craft beer from local breweries and live music from local talent.

River and Blues Festival (May 15 & 16) – This two-day summer festival cannot be missed. Picture two days of country and blues featuring a mix of old favorites and new talents such as Maddie & Tae, Charley Crockett Grady Spencer & The Work, Bart Crow and so many more amazing acts!

Check out www.pantherislandpavilion.com/events for the full lineup and event announcements throughout the year.

Visit DFW released their list of place to rock in DFW this summer! Read about Rockin’ the River, the live music and tubing series at Panther Island Pavilion.

This all-day Saturday shindig is free to the public and is the place to cool off this summer while tubing along the Trinity River. Gates open at 1 PM each Saturday (July 6 – August 10), and the music starts at 2:15 p.m. featuring three bands and a headliner. We’re counting down to August 3, to see Adam Hood. To cap off the party, enjoy fireworks show following the concerts at 9:25 p.m.

Fort Worth’s Fourth
Fort Worth’s Fourth is a full day of free family fun at Panther Island Pavilion on the Trinity River. The celebration also includes live music from Poo Live Crew and Party Machine Band, Hydroflight Team Show performances throughout the day, a kids zone, tubing, and more. Plus when the sun goes down, spectators are treated to the largest fireworks show in North Texas, coordinated with music on 95.9 The Ranch.

“Summer is the time for concerts and taking a dip in a beautiful pool and now you can do both at the same time. Panther Island Pavilion is having its Rockin’ The River concert series every Saturday from July 6th to August 10th. The concerts will start at 1 p.m. and end at around 9:30 p.m. While at the concert, you will be able to grab your favorite tubing device and hit the water.

The show will end in fireworks every night starting at around 9:25 p.m. with just about 5 artists playing the music you love. Some of the artists playing include Kody West, Prophets & Outlaws and Zac Wilkerson. The stage is the only waterfront concert stage in Texas, making this a unique summer experience.

The event is free but you will need your wallet for all the yummy food and drinks available the event. If you don’t have your own tube to bring, you can rent a tube at the event for $6. There is no outside food or drinks allowed but you can take your dog to the event as long as you keep him on a leash. Don’t forget your I.D. since there will be alcoholic beverages ready for purchase!
While the event is free, you can also purchase a $500 VIP pass. The pass is a pack of four and gives you access to all six summer concerts. You also get two premium parking passes and four wristbands for a VIP shaded area. If you plan on purchasing a pass, we suggest you do it soon as they are limited and do tend to sell out.

The Panther Island Pavilion is located at 395 Purcey St, Fort Worth. For more information on the concerts, you can visit their website here.

Why you need to go: You get the chance to experience an awesome concert and firework show while tubing down their lazy river. ”

As we are gearing up for the summer event season, we are excited to see one of our events mentioned in MSN’s “The Must-Attend Summer Festival in Every State”. Find out more about the event below and see you out at Panther Island Pavilion all summer long!

Every Saturday, July 6-August 10
Tube down the Trinity River in Fort Worth, enjoy a refreshing beverage and listen to great live music. Just bring yourself to the river – tubes, food, and drinks are all available for purchase on site – and prepare for a day of floating, followed by a night of fireworks! View the Rockin’ The River site for more!

This year we are proud to announce under the Nightlife & Entertainment category, Panther Island Pavilion has won the “Reader Pick” for Best Outdoor Venue for the second year in a row!

Thank you Fort Worth, we appreciate the love!

During April 27 and 28, the Disco Donnie’s inaugural sold out, Ubbi Dubbi Festival, took place at Panther Island Pavilion. Read their press release below to see how they gave back to the Fort Worth community by donating $15,000 to three local charities: The Fort Worth POA “Cops for Kids”, Fort Worth B-Cycle and Girls Rock Fort Worth

New York, NY, May 3, 2019 — Over the weekend of April 27–28, Disco Donnie Presents’ inaugural Ubbi Dubbi Festival sold out completely, selling 45,000 tickets in two days. In keeping with DDP’s tradition of giving back to the community, today DDP announces that they are donating $15,000 of the revenue to three local charities: The Fort Worth POA “Cops for Kids,” Fort Worth B-Cycle, and Girls Rock Fort Worth.

Having successfully launched Ubbi Dubbi, Disco Donnie now turns his focus to Sunset Music Festival which kicks off the summer festival season on Memorial Day Weekend, May 25–26, in Tampa, Florida.

About Fort Worth POA “Cops for Kids”
The Fort Worth POA “Cops for Kids” program is a 501(c)(3) non-profit organization founded in 2003, and through private funding, has served over 5,000 disadvantaged children in the Fort Worth Community by providing gifts to those children in local hospitals, scholarship opportunities, school supplies, and social activities. Cops for Kids demonstrates local law enforcement’s continued concern for the children in our community by encouraging them to foster stronger family relationships, quality friends, with a focus on education.

About Girls Rock Fort Worth
Girls Rock Fort Worth exists to empower girls of all backgrounds and abilities through musical education, performance and workshops. The organization’s goal is to provide young women with a positive and supportive community of peers and mentors to enhance their self-esteem and encourage social change.

James “Disco Donnie” Estopinal, Jr. is DDP’s founder and CEO. Considered one of the godfathers of U.S. electronic dance music, Disco Donnie has grown over the past 25 years to become one of the leading dance music promoters in the world. From his early days in the 1990s New Orleans dance scene, Disco Donnie coupled eccentricity with ingenuity to create elaborately themed parties that charmed patrons, garnered an international following, and unwittingly became a catalyst for a national debate over the First Amendment right to expression.

Read about the upcoming event on May 11, Mimosa Run, included in Culture Map Fort Worth’s “18 fun walks and runs in Dallas-Fort Worth to step up and give back this spring”

Mimosa Run, May 11
You read that correctly. The fifth annual affair features a two-mile social run or walk and a four-mile race benefiting Mothers’ Milk Bank of North Texas, brunch, and, as previously stated, mimosas. Festivities begin at 8:30 am, and pricing begins at $50. Panther Island Pavilion, Fort Worth.

“Fox 4 is a proud sponsor of March for Babies again this year. There will be two events this year but on two different dates.  The Fort Worth march will be April 13 at Panther Island Pavilion. The Dallas march will be May 4 on the lawn of Reunion Tower.  More information on the events can be found at marchforbabies.org.”

Read the full article and watch the video by clicking on the button below. 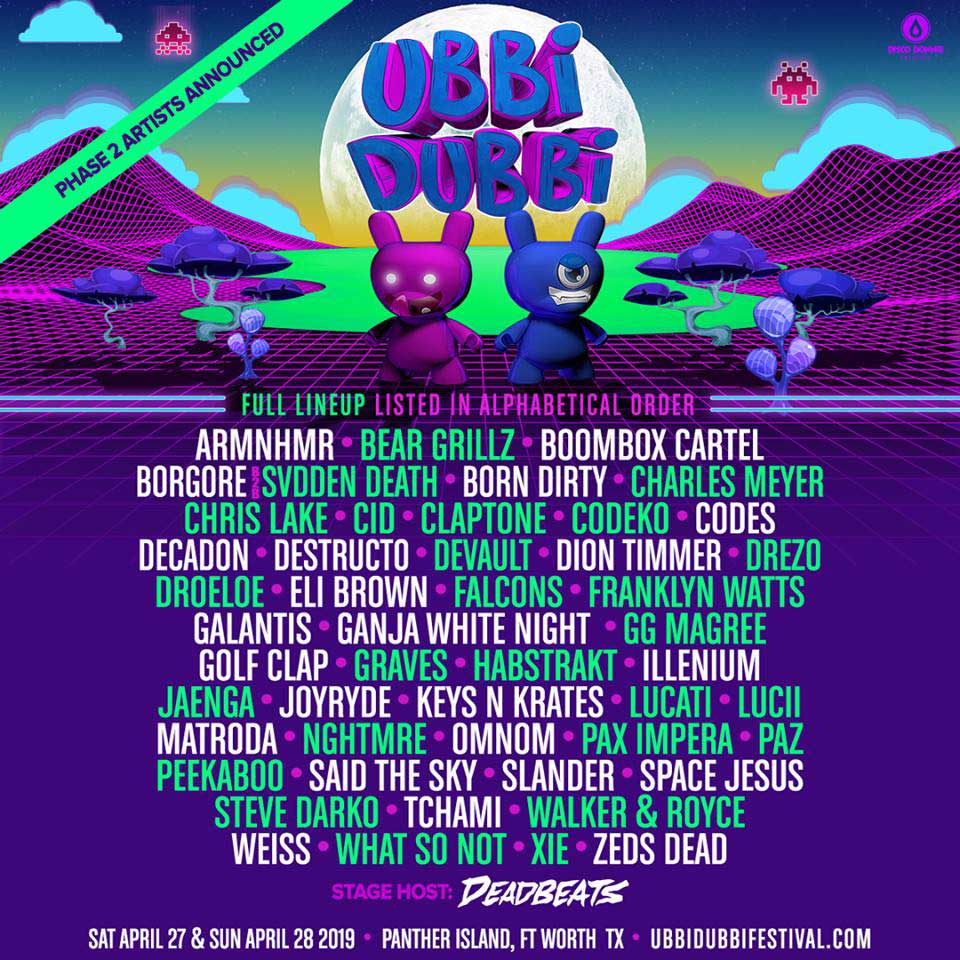 Set to take place on Panther Island in Fort Worth, Texas on Saturday, April 27th and Sunday, April 28th, Ubbi Dubbi is slated to be one of the springtime’s premier dance music events.

Based on the first wave of lineup announcements alone, Ubbi Dubbi was already shaping up to be one of the best new events of the upcoming season. The excellent second phase of artist announcements really puts things over the top.” – EDM.COM 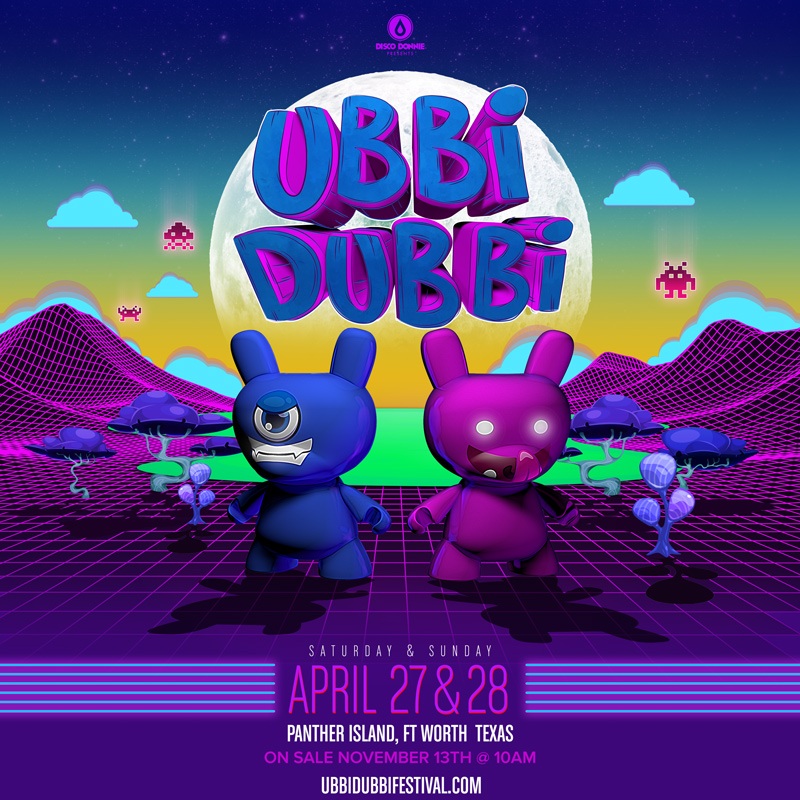 “Disco Donnie Presents Worldwide recently announced the Phase 1 lineup of its inaugural Ubbi Dubbi festival set to take place next year on Panther Island in Forth Worth, Texas on April 27 and 28. The Phase 1 lineup includes Boombox Cartel, Borgore, Destructo, Galantis, Ganja White Night, Golf Clap, Illenium, Tchami, Weiss, Zeds Dead and more with an additional 25 artists that will be announced for Phase 2 in the upcoming weeks….”